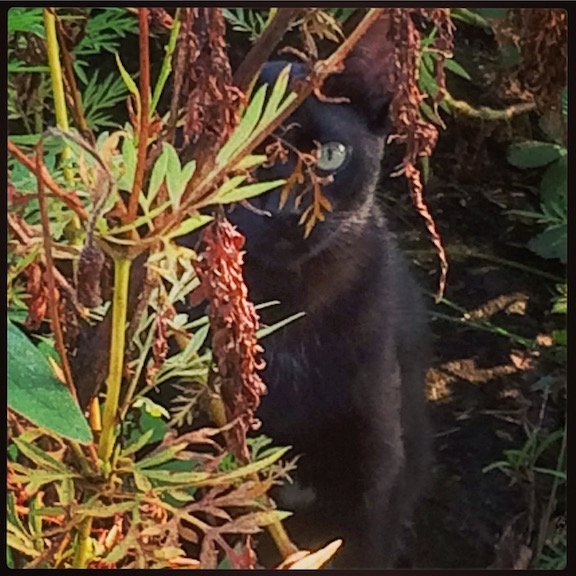 Hardly something to celebrate, this activity seemingly so central to cat culture, the one characteristic all cat owners despise. A cat wakes you in the morning, walks into the kitchen, and vomits on the floor, looking at you in disgust as if to say, “Why haven’t you cleaned this up yet?” After breakfast, a cat will walk outside, eat grass, and promptly vomit again, look disgustedly at it, then bound away. It’s a ritual, much the same as the morning ritual of heavy smokers who walk into the bathroom, look into the mirror, and hack.

He’s only about 10 months old. He came to me when he was around 3 months, more or less, mostly less. He was picked out at a pet adoption fair by a couple of friends who felt I lead a very solitary life and need companionship. They’re right, of course. I do lead a very solitary life, mostly by choice. But also because no one can stand me for long. Three months seems to be the limit. Some rare souls have made it longer, but they are exceptional people who deserve medals of valor.

I’m a difficult person to live with, I admit. Definitely antisocial, I avoid large gatherings where humans are forced to laugh and talk together. I’m fine one on one, or even two or three, but throw a couple more in and I’d rather die. I shrink away, sit at the edges, looking in and judging, much like a cat.

And even in those cases where it is reciprocal, it never lasts. I’m too severe. I find it hard to engage in light conversation and few people really care to discuss Buber or Kierkegaard or Foucault more than once a week. Fewer still care to hear about the consequences of the proliferation of mangoes on the Atlantic Forest biome. And when was the last time you, dear reader, found yourself discussing the role of linguistics, more specifically, the use of phrasal verbs, in deciding the election between George Bush and Al Gore? (Yes, it can be argued that cultural distrust of didactic speech, specifically the use of Latinate verbs as opposed to the more Germanic phrasal verbs, played a decisive role in determining the election, thereby leading the US and the world into war and economic collapse.) (Bernie Sanders, take note: Americans prefer to find out rather than to discover.)

See what I mean?

I also don’t seem to enjoy myself, at least not in conventional ways. I prefer the solitude of forests to the noise, heat and the endless sameness of the beach. Falling leaves, the smell of bark, swaying branches, it all leaves me overjoyed. Crashing waves and the smell of fish irritate me.

I’m the kind of guy who likes watching grass grow.

On the other hand, I love open air markets. It is the only social environment where I am able to tune people out. I am mesmerized by the almost overwhelming variety of vegetables and products and I have to see it all. I will walk down every aisle, every row, look at every item, sometimes more than once. People who dare to go with me eventually just abandon me, telling me to meet them somewhere when I am done. I’ve even had some people just leave me.

Going out with friends is a chore for almost everyone involved, me included. Vegetarian, now vegan, I don’t want to go to your favorite seafood restaurant. Sorry. And I don’t drink, so no, I don’t want a beer. I don’t want a beer. Please stop, I DON’T FUCKING WANT A BEER! (A friend once grabbed me by the shoulders and shook me, saying I need to lighten up. We are no longer friends. I guess by now he knows this. It’s been a few years.)

In fact, food and drink are very important parts of my life, even if not extremely varied. My liquid intake consists of coffee, water, tea, and juice, in that order. Not wine. Not beer. Not even Coca Cola.

As for my food, I don’t eat meat. And I don’t want to hear how I need it. I don’t. Any health issues I may have are not due to diet. Your meat habit disgusts me. It is dull, unvaried, and bad for the planet. I’m a good cook and people often ask me to cook for them. But it never fails, after I have cooked, someone always comments how much better it would be with meat. Fuck off. Be like my cat. Today, he begged me for a piece of pineapple I was eating so I put a piece in front of him. He smelled it, knocked it into the bushes, and walked away. Can you be more like my cat?

See what I mean? Definitely not the kind of friend to go to a concert with. In fact, some of my fondest memories of going out with friends don’t involve concerts or parties things like that, but just walking together.

Cats will do that. They’ll just sort of sit together in a group, looking at each other, licking their paws once in awhile. Or they’ll just go walking together.

My cat is like that. He’ll often just sit near me. If I take a nap in the afternoon (which I enjoy) I’ll get up later to find him looking at me from some corner in the room where he, too, had decided to take a nap.

Or I’ll go walking in the forest, thinking he’s stayed at home because it’s far and he is still young and it is dangerous for him, when I’ll suddenly hear the leaves rustle near me and I’ll see him poking his head out, as if to say, “I’m right here. Where you go, I go.”

Dogs will do that, but they’re exuberant about it. They want you to see they are coming along, insist you notice. Or worse, try to pull you where they want to go.

Cats will go where you go, just happy to be with you, even if at a distance.

And today, my little cat vomited.

I was thinking just yesterday he never vomits. All cats vomit. It’s part of their DNA. But he never had. It’s kind of like a marker in his development. He’s been neutered, so he won’t have any sexual milestones. Vomiting is it.

And today, my little kitten became a cat.

He was in the kitchen when he suddenly came rushing out of the house, ran over to a sand pile, and vomited with that familiar hacking “ack ack” all cat owners know. Afterwards, he looked at it with disgust, tried burying it, then ran into some nearby bushes and cried.

I called him out, reassuring him. He came out, stretched, and rolled around on some plants. Everything back to normal.

All of this to say I think (I know) my friends are right. I do lead a very solitary life. And it isn’t right to say, “Well, I have a cat. That’s enough.” It isn’t enough. And cats vomit. A lot.

The last time my mother came to visit, she asked me if I was ever going to meet anybody. How could I answer her? How could I say I meet people all the time, every day, every time I walk out the door? The guy I sit next to on the bus whenever I have to go to Piúma (we talk, mostly about his future or English classes or plants). The guy I buy water from when I’m in Iconha and I’m dying of thirst (we’ve never talked). Or the guy who sometimes gives me a ride up the mountain on his motorcycle. They are all cats, like me. I can see it in their eyes. I can hear it in their voices. I can feel it.

I want to tell the guy on the bus to come to Tapuio with me, to lie beside me as we watch the moon rise vast and brilliant out of the Atlantic Ocean 1300 feet below, fireflies and huge fluorescent moths flying about our heads.

Instead, I tell him he really needs to learn English if he wants to have a decent future as an engineer here in Brazil.

I want to tell the guy who sells me water that his hands are beautiful, his eyes even more so, and that I want to feel those hands and see those eyes every day for the rest of my life.

Instead, I look down and ask him how much. (I know the price. I just want to hear his voice.)

I don’t even talk to the guy who carries me up the mountain on his motorcycle. I just let him ramble on about whatever he wants to say. “Sure is hot. We could use some rain. The manioc is looking good. I’m thinking about putting in avocados and litchi.”

And one vomiting member of the family is enough.