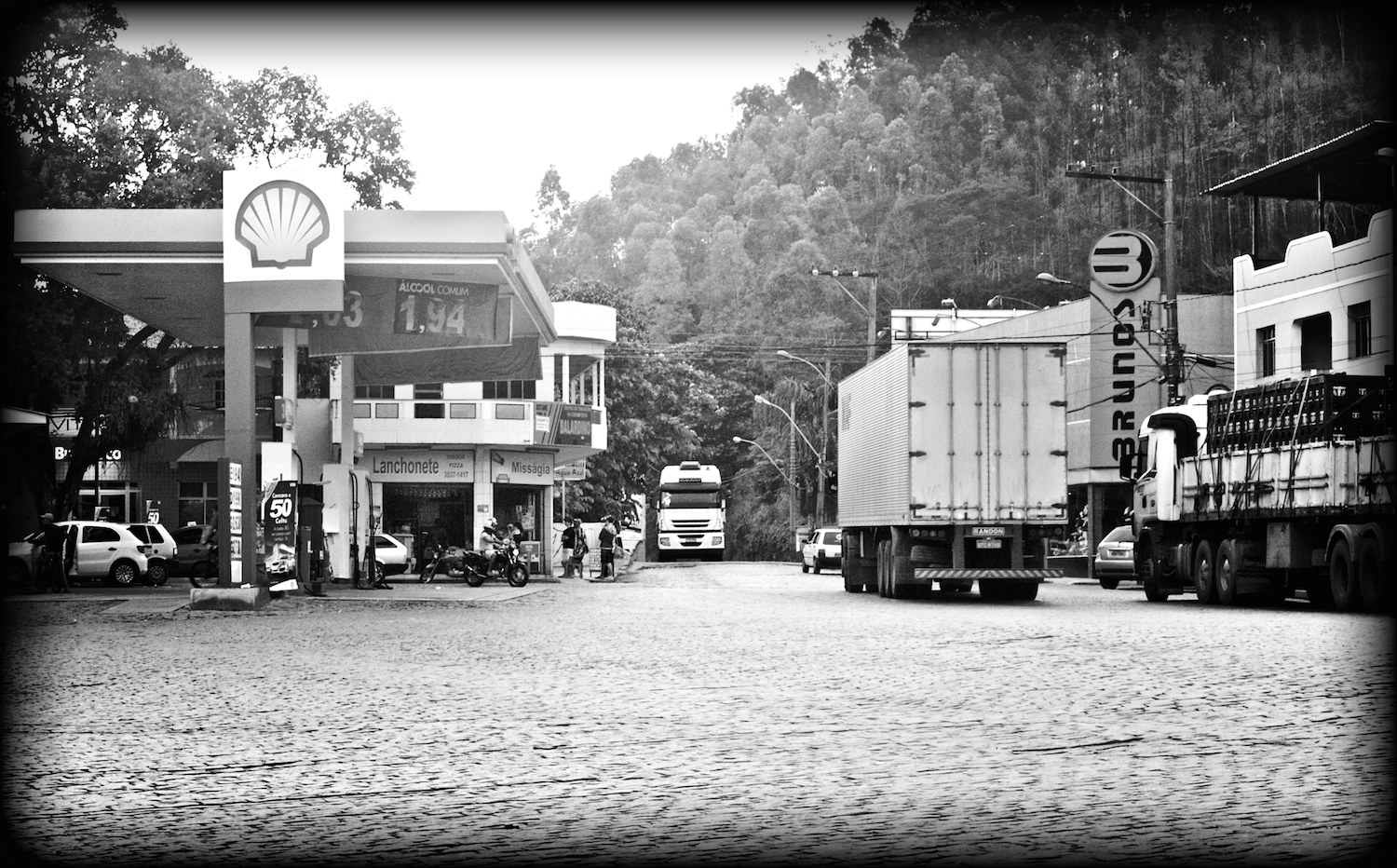 I woke up to the sound of heavy rain, a morning as dark as dusk. Fall has arrived, the rain has finally arrived.

It rains incessantly now. There are two colors in Tapuio during the rains: green and gray. Well, there is also white, the white of clouds wandering up the mountainside like herds of ghost cows. But it’s a white more like soft gray.

Occasionally the sun will burst through the rain dripping butter on all the leaves. That doesn’t last long. Clouds move back in, wash the butter away.

(There is an interesting aspect to the rain in Tapuio. Even at its heaviest, the rain here has texture. It never comes down in sheets, the waves of solid water so common in the States. Even at its worst, you can see each drop, distinct. The rain doesn’t so much fall here as swarm.)

At any rate, I was thinking about all the possibilities for projects, and among them are those involving non destructive agricultural practices, or the production of more sustainable, less destructive crops. Currently, production is geared to cattle, bananas, and coffee.

• Cattle production involves the creation of pasture in a mountainous region with heavy rains. Removing the cover results in heavy erosion, loss of soil nutrients, weaker, less nutritious grass, and undernourished cattle, as well as incredible loss of biodiversity through removal of the forest cover.

• Banana cultivation doesn’t require heavy destruction to the environment, but as practiced here, it usually does. The forest cover is removed and the area blanketed in bananas. As banana plants are not fibrous rooted, nothing secures the soil, which washes away in the heavy rains. Banana plants are also vulnerable to wind damage. Windbreaks are not planted here. Pesticides are not used here on bananas, but herbicides are commonly used around bananas.

• Coffee cultivation is not a high quality operation as practiced in Iconha. The variety of coffee grown is Conillon, an inferior species of coffee. While coffee production can be compatible with a mountainous and biologically diverse environment, it is not so practiced here. Its production here is heavily dependent on herbicides and pesticides, some incredibly dangerous. The price of conillon has also fallen in the past few years, leading some to abandon its production in favor of cattle.

Two other items cultivated in this region worth mentioning are rubber and eucalyptus. Rubber is a recent introduction. Although it is native to Brazil, it is not native to this region. Rubber trees cast a dense shade, inhibiting the growth of other plants. They are usually planted in immense blocks, creating environmentally dead zones. Nothing here eats the fruit of rubber trees. With its production, the area suffers a loss of biodiversity.

Eucalyptus is also commonly planted in the area. It is typically grown for timber and charcoal. It sucks up groundwater, reduces biodiversity, and its cultivation results in vast tracts of forest being removed.

A few possible areas of research these practices could generate for the enterprising student would be the resulting destruction to the environment because of the agriculture practiced. What has been the result in terms of soil fertility? Has the local agricultural resulted in better nutritional intake on the part of the population? Has there been a negative effect on the health of the farmers/people in the city due to increased exposure to pesticides? Has there been a decline int he nutritional value of produce grown here as a result in lower soil fertility?

What have been the environmental effects of local agricultural practices? Loss of biodiversity, loss of top soil. Has there been an increase in exposure to certain pathogens as a result of this loss of environment (e.g. meningitis, leishmaniasis, leptospirosis, dengue).

What about some alternatives which have the potential of providing more income with less environmental destruction, such as tea, macadamia, tree tomatoes, litchi, moringa? A few years ago a study was done on the potential for the cultivation of Araucaria (a kind of nut). It was shown that the region of Tapuio is certainly environmentally cold enough. Does it have enough water? Would this result in increased income and nutrition for local farmers and consumers?

There is also a strong need for biological and environmental surveys done in Tapuio to see what still remains of the native flora and fauna. For example, what has been the effect of the loss of orchids? Is there a decline in spiders and how has that affected agriculture?

Other areas of research:

• Tourism. Most of the tourism in the area has been the quick and dirty type, geared to maximum profit in minimum time, resulting in a philosophy of quantity over quality, which has also resulted in a general degradation of the area in terms of quality of life. The nearby community of Iriri, a beach community in the municipality of Anchieta, experienced somewhere between 3 and 6 deaths this past Carnaval due to the kind of tourist they have come to attract. Cachoeira do Meio, a community just below Tapuio in the municipality of Iconha, has developed a rural tourism centered on its small river falls, attracting many day tourists. Bars and cottages have proliferated in the area, the cottages generally attached and geared to the lower income tourist who has just enough money for a few days. This Carnaval, Cachoeira do Meio witnessed its first murder, a brutal murder in which a tourist from a neighboring state was battered with rocks and then set on fire after leaving a bar there in the early hours of the morning. He burned to death. How has the quick and dirty form of tourism development contributed to this atmosphere of violence?

What are some alternative development projects which could attract a better class of tourist and what are some means of educating the local population to understand that quality pays more int he long term?

• Anthropological. Iconha was the center of a massive Italian immigration into the state of Espírito Santo. That immigration has often been blamed with the loss of culture, as most of the Italians who moved in were rural farmers with little broad exposure to culture, literature, arts. As farmers and businessmen, they have been quite successful in the area. But the areas does suffer a lack of culture. There are no theaters. Festivals and celebrations are few and typically of very poor quality. The Italian immigration was quite recent, in many cases within the last generation. Grandparents often still speak Italian. What has happened to this culture? Is there a correlation between the immigration and a loss of broader cultural expression? Or are people scapegoating? In many respects Iconha is quite different from the surrounding towns. It is considerably more business oriented, much less concerned with quality of life. Incomes are typically quite high but at the same time there is a widening gap between the wealthy and the workers. Social divisions are being exacerbated by the arrival of people from other states brought in to do the more menial labor, who often work in the surrounding communities but live in Iconha. Disparity and inequality are increasingly common in a city where distribution of income was not as pronounced in the past as it is now. Why has this happened, and where will this lead Iconha in a rapidly developing and economically wealthier Brazil (This involves Anthropology, Sociology, and Business)?

• Sociology. As Iconha continues to grow, it is becoming increasingly evangelical and increasingly less tolerant. How does this fit in with the above topic and what could be the outcome for Iconha?

• Art. While everybody in Iconha with a camera claims to be a photographer and wedding/party photography and nature shots are extremely popular, there is no use of photography to document social development in this municipality. Older Italian immigrants are disappearing, their lifestyles and expressions being lost, their children quickly adapting to a more generic Brazilian look, and nobody is documenting this in any fashion, much less through photography. There are also older cultural expressions dying out in this region, photographically undocumented. Here, nobody cares. An art project to record this loss would be interesting. It would also be interesting to see how a photographic recording of this expression could create a sense of nostalgia and desire to protect certain expressions, revitalize a sense of pride, rather than a sense of contempt for one’s past.

Another artistic area of interest is street art. Murals and outdoor paintings typically have enjoyed social support in Brazil, but not in Iconha. Most street art is gang related graffiti and is highly destructive. How could a project such as https://www.facebook.com/walltherapyny contribute to the development of a cleaner, safer city?

• Business development. Could Iconha benefit from the kind of development described by such groups as the Slow Movement? There have been some attempts in the past, they have all failed usually due to the egos of those involved. Is there a way to introduce these concepts without involving the egos of the members (the answer, of course, is yes, but it depends on interested people coming here and establishing an order within this horrible zone of social conflict, in a sense the kind of gentrification process that takes place in the transformation of run down districts into arts districts or zones of innovation). Example, the side streets here are quite interesting areas for the introduction of small specialty shops and dining areas, little nooks and crannies which presently are simply horrible trash filled and uncared for. They could easily be transformed into friendlier and calmer centers of mixed living/commerce of a slower higher quality local nature.

• Architecture. HELP!!!!!!! The use of public spaces here is quite simply a nightmare, The main square is dark, unimaginative, and painted GRAY!!!! There are two other small squares in Iconha. Of the three in the city, only one is halfway decent, mainly because it is found in a higher income residential area. The other two are centers of drug dealing and prostitution. The main square also stinks due to its use as an open toilet by both residents and homeless drifters who often sleep on the benches or in its corners. At night, it is fringed by trailers set up as food stands, creating a nightmare of traffic, crowding, and noise. There is little regulation. Electric cables stretch across the road, trash is strewn everywhere, and dark corners are used as latrines. A perfect solution would be such as seen in Chinandega, Nicaragua, where the municipal government construct stalls with limited seating, then rented by the vendors. Such a practice controls the noise, the crowding, the trash. It benefits the city and the vendor. Would such a practice be viable in Iconha?

The list could go on and on and on. But I’m sure you can see where this could go. I would truly love to see at least some of this take place here. It won’t happen through the locals themselves. They see little benefit in it for the individual. It would have to be people from the outside who simply do it. Is it worth it?

By the way, the very best way you can do something is simply to come visit. Come to Iconha. Come to Tapuio. Sometimes, all it takes is being here.

One thought on “What can I do?”