Rain and Roads and Getting Home

It has rained a lot this year and the country roads have all suffered. Ruts, rocks, holes, and mud have made going up and down the mountain treacherous. As I get home quite late (usually around 11 pm) I rarely take my motorcycle all the way to my house. That would be suicidal. I prefer to stay alive and in one piece and leave my motorcycle on the side of the road, continuing on foot for the last 300 or so meters.

During the last round of heavy rains, two large rocks rolled onto the road, blocking passage. It’s been about a month. The municipal government was immediately notified of the problem. They are supposedly still studying the matter. I suspect it will take another two years to find a solution, just in time for the next mayoral elections.

(The only solution we, the workers and landowners of Tapuio, came up with is to move the smaller stone off to the side of the road and stabilize it with small stones at its base and forge a road around the larger stone, which is the size of a semi and can roll onto the road at any minute. It is very difficult to get past there, whether on a motorcycle or in a jeep or by larger truck, like the one that comes up here to buy bananas.)

I am the only permanent resident, and I can’t vote here. So any repairs that make my life easier are seen as unnecessary.

It would be nice if people here voiced their indignation, but they see it as normal. That’s the way it has always been. That’s the way their grandparents managed things.

That’s the way it’s done here. You can get angry, but so what? Election time will soon roll around. In the meantime, we’ll find a way.

Not that repairs actually repair anything. Most repairs are just enough to provide temporary relief. The road will be ok (never great) until the following rainstorm. The municipality drives up with a few loads of stone-filled clay which they dump on the road in great piles. Then if the driver feels like it, he’ll drive over it a couple times, leaving huge ruts and stones scattered about. We are expected to come along after they’ve finished in order to remove the larger stones from the surface and smooth it all out.

If the work is done in the dead of winter or the dead of summer, when it rains very little (if at all), the road might, maybe, last a few months. Possibly. As I said, the repairs are generally quite superficial. Mainly because it’s cheap. And people go along with it for a few reasons, such as tradition (that’s the way we do it), frustration (it’s better than nothing!), and lack of reference (isn’t that the best we can do?). A good job, such as using ground up clay bricks (used in a neighboring state and proven to work beautifully) would do too good a job, leaving nothing to bargain with during elections. You can’t win votes promising to repair roads if the roads are already repaired.

But the repairs rarely last long. It might rain, destroying in one afternoon all the work done. (The mini repair of 2010 lasted a full two weeks before a rainstorm washed it all away. The municipal government didn’t return to affect repairs until 2016, just before the election. Prior to 2010, a repair was affected in 2008. That repair lasted until the beginning of 2010.) (Prior to 2008, some repairs were made in 2005 when the municipal government donated materials for the landowners to do their own repairs.)

But it isn’t just nature which destroys. Motorcyclists on trail bikes will roar through the area, especially after a heavy rain, in groups of up to 30, blasting the tranquility with their motors, leaving total destruction in their wake. When confronted, they defend their destruction saying the fact they pay taxes allows them to do what they want. If we don’t like it, we can complain to the municipal government (which couldn’t care less since most of these trailblazers are elitists, electors, supporters of the current power). Sometimes these are the sons of neighboring landowners who would be furious if anyone did this near their homes. After one of my complaints, a local resident, a minor, wrote on Facebook he would run me over with his motorcycle if he saw me on the road. He was applauded by his friends and family. I was attacked by one guy who claimed I showed a lack of respect to him and his son when I called him and his friends SOBs. He leaped off his motorcycle and began punching me in the chest and head while his friends shouted things such as I am not a man, I am not Brazilian, I’m a nobody, and I need to go away. One of his friends came up to me and held me while the aggressor tried repeatedly to punch me in the head, all the while shouting how I need to go away. (I filed a complaint with the police. A year later he was finally called into court and sentenced to a small fine.)

Often it’s the very people who most need a good road who do the most damage. After almost every minor repair, everybody runs out with hoes and shovels to “get the water off the road” by creating a series of drainage ditches. The road will be criss-crossed by them, some of which are up to a foot deep. Usually on the lower side of the ditch they will build a high lip so that theoretically water running down the road will run into the ditch, hit that high lip, and run down the ditch to wherever it takes the water. I guess the idea is ok, but what actually happens is intense erosion. Worse, rocks and stones in the clay the municipal government uses to “repair” the road wash down into the ditch or at least up to the ditch, creating piles of rubble. If you happen to be driving up in a truck or jeep, the deep ditch and rubble don’t affect you much. You just drive over it all, slinging stones everywhere. If, on the other hand, you’re on a motorcycle, it’s practically impossible to drive over all that without falling. If you are riding up on a motorcycle, you can’t see the depth of the ditch nor the degree of erosion so you have to stop at the edge to evaluate the situation. Otherwise, you risk falling into a deep ditch, possible breaking a leg and most certainly breaking something on your motorcycle. 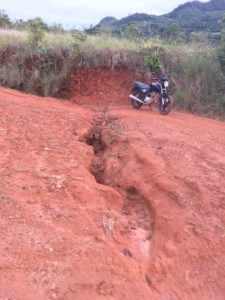 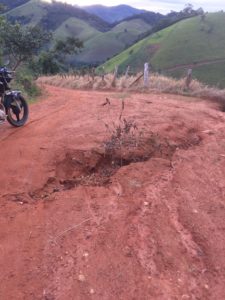 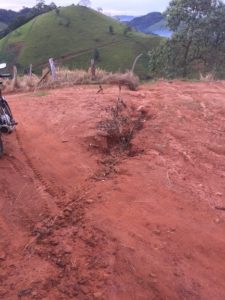 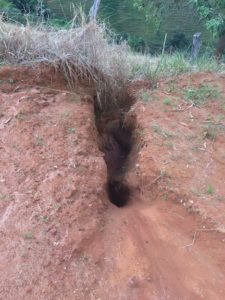 Since December I’ve spent over a thousand reais (R$1000) on repairs to my motorcycle because of the condition of the road. I occasionally walk along the road looking for screws which have fallen out of my or someone else’s motorcycle so that I don’t run over them and puncture a tire.

There’a also the farmer or worker who decides either during or right after a particularly heavy rain that they need at that moment to drive up in a jeep on roads that have turned into seas of mud “to check on things”. You can hear them from literally kilometers away as they race and rev their engines, grinding wheels deeper and deeper into the mud, fishtailing, creating new ruts and tossing rocks everywhere as they force their way up the mountain. Why do they do this? To show nature who’s boss. Because it’s fun. Because it’s the closest they’ll ever come to being bonafide cowboys.

The situation is potentially dangerous. If by any chance you happen to step on a pit viper and it decides to let you know with a little bite to the leg, forget about calling for help. Any call you make will be to say good bye and to let someone know where to find the body. “You’ll find me under the breadfruit tree in the back. It’s really pretty there. Tell everyone I love them. Bye.”

The other night a hunter decided to let me know he wasn’t afraid of me by firing his gun in the front of my house. I called the police. They told me police cars won’t drive up here, so best of luck.

All of this irritates me somewhat. Brazil is the 8th largest economy in the world (it used to be higher, it used to be lower). It has the 10th largest foreign currency reserves (that too used to be higher). Espírito Santo is the 13th richest state in Brazil and Iconha holds the 46th spot out of 78 in the state. It comes in at number 20 in terms of per capita income in the state. There really isn’t any reason for this complete lack of repair or maintenance of infrastructure.

But there it is.

I’ve written about this many times before, in many ways, such as here. And here.

Still, I said I’m of two minds here. So what could possibly be the other side?

The bad road impedes “development”. Because it’s hard to come up here, people rarely come up here. And being antisocial, that makes me happy!